Adrienne D. Makes Legacy Gift in Her Will in Addition to Annual Giving 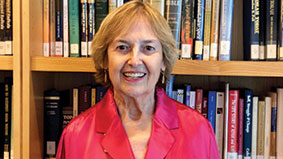 Adrienne D. came from a kind and generous family but didn’t learn about charitable giving until later in life. “I originally started donating to charity here and there from solicitations I got in the mail,” she says, “but only in small amounts, and I didn’t pay much attention.” During the course of her 40-year career in real estate and affordable housing, she realized that she wanted to do volunteer work for a Jewish organization. She asked a friend for some recommendations and received a list of five or six leads.

“I called each one and either left a message or asked questions that were never followed up with answers,” Adrienne says. “The only organization that got back to me with opportunities was UJA. I called UJA and spoke with a person, and within 30 minutes I received another call back from a person who was dedicated to helping me. I immediately felt a warm and welcoming vibe.”

After many happy years of volunteer service and annual giving, Adrienne has committed to furthering her legacy at UJA through a bequest in her will to continue her support of UJA for future generations.

“Through committees, site visits, and missions, I have visited UJA-funded organizations and programs,” Adrienne says. “It was so important for me to have that firsthand experience and observe and participate, talking to people receiving the help. I went from volunteering to giving; as I got more involved in UJA through its agencies, I increased my giving as I saw how impactful the work was.”

Getting started in New York City

Adrienne moved to New York for a summer job at The New Yorker magazine as a writer and says she started working in real estate and affordable housing by accident. “Someone I knew was working for NYC Housing Preservation and Development (HPD), where they were looking for a writer to write about affordable housing,” she says. “I was hired because of my writing skills but also because I didn’t know anything about the topic. I was able to write in a way that was easy for the public to understand. I spent two years developing the manual on developing affordable housing in NYC.”

She worked for the City for about ten years. “I loved my job, learned great work ethics, and learned how to navigate bureaucracy,” Adrienne says. “I worked for the deputy commissioner, a female — which was unique in those days. We built and received financing for low-income housing. The benefits of working at a city agency were great, but the pay was not; so I went into the private sector. I worked for about ten years at MetLife in real estate investments. The work was interesting but not satisfying. Then I worked for a British owned company that invested pensions in U.S. real estate.”

In 2004 Adrienne took an early retirement and started her own consulting business for state subsidized housing agencies.

Finding her way to UJA

After that fateful phone call to UJA, Adrienne connected with Stanley Baumblatt, UJA’s Director, Planned Giving & Endowments. “Stanley asked me for my resume,” she says. “Later, he called to ask me to get lunch so we could talk more and find the right opportunity for me to volunteer with UJA. On that lunch meeting, Stan brought Jill Mendelson of the Management Assistance Program (MAP), a UJA program that connected volunteers with UJA agency organizations to provide pro bono help. I fell in love with Stan and Jill at that first lunch; they were wonderful, smart, professional, and eager to help me find my niche. The meeting had nothing to do with donations. It was simply to help me find a spot to volunteer and assist me in finding my way. From there, I went on in the MAP program and worked on many assignments with various UJA agencies.”

One of Adrienne’s most memorable experiences with UJA was when she visited a UJA-funded organization downtown where meals are prepared and served to deaf and blind Holocaust survivors. “The lunches were prepared by local minority students from a nearby high school,” she says. “It was an amazing program that provided intergenerational and interracial experiences. It brought so much joy to everyone involved.”

Adrienne has also been active in the Women’s Executive Circle (WEC). “Through WEC I participated in all missions around the world where I got to see various UJA-funded programs and the impact of UJA’s work,” she says. “Seeing the work firsthand was invaluable and so wonderful.”

On one mission, Adrienne met Tammy Brass who mentioned that UJA has committees. “I did not know what they were, and she educated me on the structure and introduced me to various options,” Adrienne says. “Together, she helped me find committees I would enjoy. I have sat on multiple over the years, including Employment and Self Sufficiency, Caring, Crisis to Stability, and Earned Revenue.”

Another close friend that Adrienne has made through UJA is Adrienne Tanner. “She approached me at my first WEC meeting and we connected over our name tags,” Adrienne says. “She introduced me to the whole room and stood by my side. She shepherded me through my initial shyness and has had a great impact on my involvement in WEC and UJA.

“The individuals mentioned above mentored me and helped me find my niche,” Adrienne continues. “They helped me and guided me to find my way. They all gave me their time and are truly wonderful. Every UJA professional I have met over the years is so nice, genuine, and professional. It is a wonderful organization.”

Leaving her legacy with an estate gift

When talking to Stan about various gift vehicles, Adrienne remembers, “I wanted to set aside cash as opposed to another asset, such as the value of my apartment, because I wanted the easiest and cleanest asset to leave to UJA. I would like to see my gift used to continue to support organizations and fund programs that will help needy Jews and non-Jews both here in New York and in Israel.”

Adrienne encourages others to make a planned gift because their gift will be used in important and meaningful ways. “I have seen firsthand how funds are used to help the neediest. It is both uplifting and exciting for us as donors but so meaningful for those who are receiving assistance,” she concludes. “There is true joy in giving, especially when you see the joy it brings others. I can’t think of another organization that has such an important role in people’s lives. UJA funds diverse programs and organizations, and everyone can find their niche.”