Arlene Appel Kleinberg Says Women Should Give Their Own Gifts, and Hers Is a Meaningful One 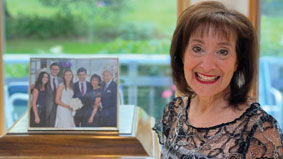 As a stay-at-home mom of three children and self-described “professional volunteer,” Arlene Appel Kleinberg didn’t have the ability to make gifts to UJA-Federation at the same level as her husband of 35 years, Michael, a successful interior architect and volunteer and donor in his own right. But Arlene believes in setting an example for others, through her own resources. “I have always felt it was important for a woman to give her own gift, for many reasons,” she says. “It’s about a woman being strong and giving from her own heart and her own means.” For many years, Arlene has given annually what she herself could afford. Over time, her annual commitment increased.

“I have always felt it was important for a woman to give her own gift, for many reasons,” says Arlene. “Many years ago you had to show the government a count of donors and gifts; so if the husband gave a gift but the wife gave a separate gift, then it counted as two. But it is much more than that. It is about a woman being strong and giving from her own heart and her own means.”

Arlene currently serves as UJA’s Campaign Chair for Westchester and recently created her own legacy gift for UJA. The time felt right. Her parents taught her the importance of helping people in need. Her father had been involved in Federation. When he passed away a few years ago, Arlene decided to bequeath a portion of her inheritance to UJA in his memory.

“I have always been really impressed with UJA Federation and its agencies, but the COVID response has made me most proud this year,” Arlene says of the reasons for her gift. “I saw them pivot and adapt to the needs of the community almost overnight.”

Arlene initially grew up in the Boston area but then moved to Texas, where she earned a bachelor’s degree in theater. She decided to move to New York City to try to become an actress—and got some advice from her father, who supported Federation work around the world.

“He was very familiar with UJA and told me I needed to get involved here,” says Arlene. “He didn’t mention his ulterior motive was that I would meet a nice Jewish man.”

And so she did. She and Michael have been married for 35 years and have three children. They are both active volunteers and philanthropists.

“I had been to many meetings that discussed legacy gifts, but I felt I was too young to think about those kinds of things,” Arlene says. “But I realize any time is right, and now seems like the right time for me. And I have to tell you: it really feels great.”